/tiles/non-collection/5/5-27-Patsy-and-Gwen-PA2013_06_0001g.xml Collection of the U.S. House of Representatives
About this object Patsy Mink took time away from her congressional duties to help her daughter Gwendolyn with her homework in 1965.
Fifty years ago, the final version of Title IX of the Education Amendments of 1972 passed the U.S. House of Representatives largely without controversy, though its journey to the floor included multiple hearings and lengthy meetings between House and Senate negotiators. Enacted on June 23, 1972, the law declared, “No person in the United States shall, on the basis of sex, be excluded from participation in, be denied the benefits of, or be subjected to discrimination under any education program or activity receiving Federal financial assistance.” One of the women at the center of this landmark legislative effort was Representative Patsy Takemoto Mink of Hawaii, who was first elected in 1964, becoming the first woman of color to serve in Congress. After its initial passage, Mink spent the balance of her political career defending Title IX. This month’s Edition for Educators highlights Representative Mink and the statute which eventually bore her name.

Born in the Hawaii Territory in 1927, Mink graduated at the top of her class from Maui High School. She attended college in Pennsylvania and Nebraska before graduating from the University of Hawai'i in 1948. Mink hoped to become a doctor, but after three medical schools rejected her applications, she applied, and was accepted, to the University of Chicago Law School. After graduating in 1951, Mink faced significant discrimination from top law firms due to her interracial marriage. Undeterred, she went into private practice in Hawaii before winning election to the territorial legislature in 1955, where she eventually served in the house and senate. When Hawaii gained statehood in 1959, Mink defied Democratic Party bosses to seek the lone At-Large seat in the U.S. House of Representatives. She lost the primary to Daniel Inouye, but she returned to the state senate three years later. In 1964, reapportionment created a second Hawaiian congressional district. Mink again ran for Congress without party backing, but this time she won.

/tiles/non-collection/5/5-27-Mink-1990-pa2013_06_0001c.xml Collection of the U.S. House of Representatives After years away, Mink returned to the House of Representatives in 1990 in a special election precipitated by Daniel Akaka's appointment to the United States Senate.
As a Member of Congress, Mink’s signature issue was education. Early in her tenure, Mink pushed for a bill that would have created a national daycare program for low-income families. The bill was included in the Economic Opportunity Act of 1971, which passed both chambers but faced a presidential veto that Congress failed to override. Mink also sponsored legislation for special education, student loans, bilingual education, and the Head Start program for early childhood development.

Mink’s memories of discrimination applying for graduate schools and entering the workforce lingered, however. During the 92nd Congress (1971–1973), Mink partnered with Edith Green of Oregon and Senator Birch Bayh of Indiana to secure the votes to pass Title IX of the Education Amendments of 1972. As the Department of Health, Education, and Welfare began administering the law, many patrons of men’s higher education athletics complained their funding was being cut to institute new programs for women’s sports. When Title IX’s opponents in Congress attempted to roll back the provision in a 1975 appropriation bill, Mink successfully blocked those efforts while navigating personal difficulties; Title IX survived.

After a nearly 14-year hiatus from Congress following a failed bid for the Senate in 1976, Mink returned to the House in 1990 to continue the pursuit of equal opportunity in education. During her second stint on Capitol Hill, Mink defended the social welfare programs from the 1960s which later administrations had scaled back. She advocated a universal health care plan and cosponsored the Gender Equity Act to establish an Office of Women’s Equity at the Department of Education, though the bill never made it out of committee. Mink argued, “We must assure that schools all across this country implement and integrate into their curriculum, policies, goals, programs, activities, and initiatives to achieve educational equity for women and girls.” After Mink died in 2002, Title IX was renamed in her honor, as the Patsy Takemoto Mink Equal Opportunity in Education Act. Today, a half century after Title IX was first implemented, more than 40 percent of college student athletes are women, with a similar percentage participating in high school sports.

/tiles/non-collection/5/5-27-Mink-pamphlet-2018_145_000-003.xml Collection of the U.S. House of Representatives
About this object Mink distributed this re-election campaign pamphlet in 1968.

/tiles/non-collection/5/5-27-Edith-Green-PA2012_04_0052.xml Collection of the U.S. House of Representatives
About this object Inspired by her educator parents, Edith Green devoted much of her House service to education reform. She influenced such legislation as the Higher Education Facilities Act and Title IX.

Patsy Takemoto Mink of Hawaii
The first woman of color elected to Congress, Mink’s trailblazing career is further explored in her biographical profile. Beyond Mink’s influence on education and gender equality, she also was recognized nationally for her opposition to the Vietnam War and support for the Lyndon B. Johnson administration’s Great Society legislation. When she returned to the House in the 1990s, Mink left her mark on organizations within the institution, co-founding the Congressional Asian Pacific American Caucus in 1994 and co-chairing the Democratic Women’s Group a year later.

Edith Starrett Green of Oregon
Mink’s partner in the passage of Title IX was Edith Green of Oregon, a former teacher who left her mark on almost every education bill enacted during her 10 terms in the House. Green led the hearings in the House of Representatives advocating passage of Title IX. Though Representative Green originally supported federal aid to education and the antipoverty programs, she grew disillusioned with what she perceived as an inefficient federal bureaucracy. Her increased frustration with “big government” contributed to her eventual drift from the Democratic Party’s agenda.

/tiles/non-collection/5/5-27-Mink-officePA2013_06_0001i.xml
Mink in the House
Representative Mink posed for this photo circa 1975, with a frequently seen type of decorative plaque, which appeared throughout the Capitol and House Office Buildings on podiums, in hearing rooms, and in Members’ offices.
On the Steps of the Capitol
In 1964, Mink won her campaign for a House seat from Hawaii and became the first woman of color elected to Congress. A few months after taking her seat, Mink posed for a photograph outside the Capitol.
Committee on Interior and Insular Affairs, 92nd Congress
The Committee on Interior and Insular Affairs’ Members sat for a photograph in 1972 with the committee staff. Mink, a committee member, sits on the right side.
Patsy Mink Lapel Pin
Mink used this button during her 1994 re-election campaign, 30 years after she became the first woman of color elected to Congress.
Patsy Mink Poster
This poster advertised for Mink’s re-election in the early 1970s.
In the Office
A few months into her first term in Congress, Representative Mink met with her staff in their Longworth Building office.

The Life of Representative Patsy Mink of Hawaii
On September 28, 2002, Representative Mink, Democrat from Hawaii and the first Asian-American woman in Congress, died in the city of Honolulu. During her time in the House, Mink had the reputation for being fiercely independent, but her decision to work outside the party’s strictures back home freed her to pursue a legislative agenda that was often national as much as it was regional in scope. “You were not elected to Congress, in my interpretation of things, to represent your district, period,” she once said. “You are national legislators.” 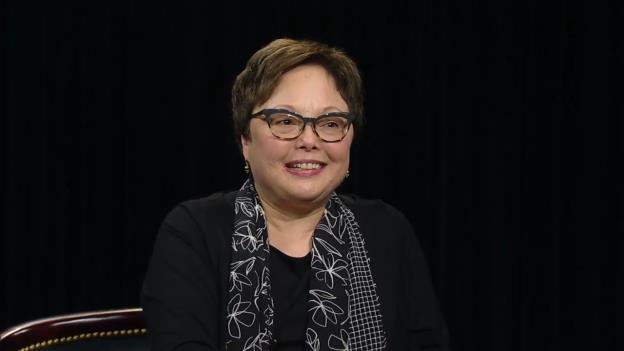 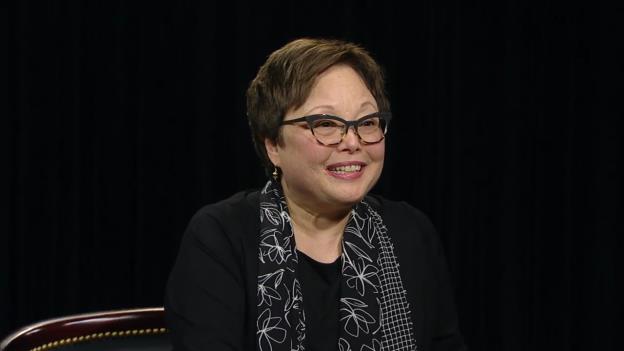 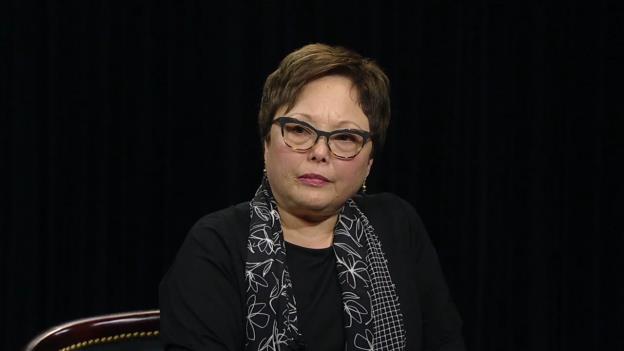 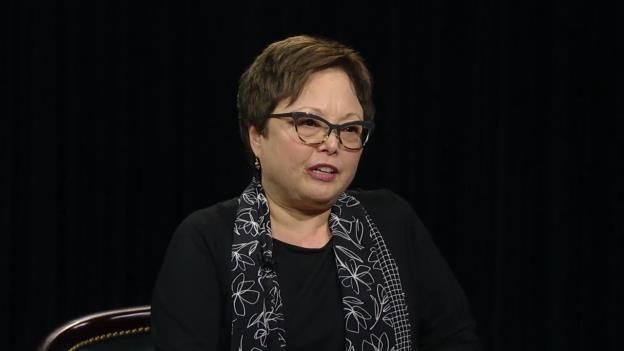 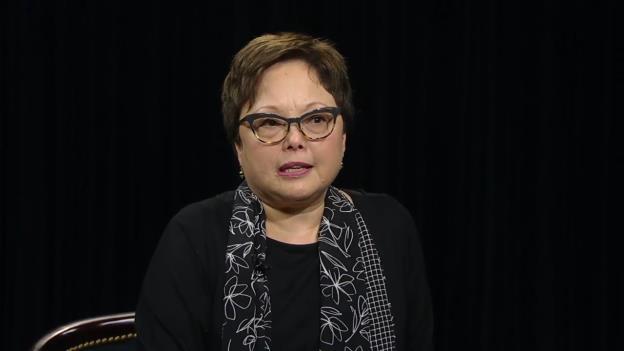 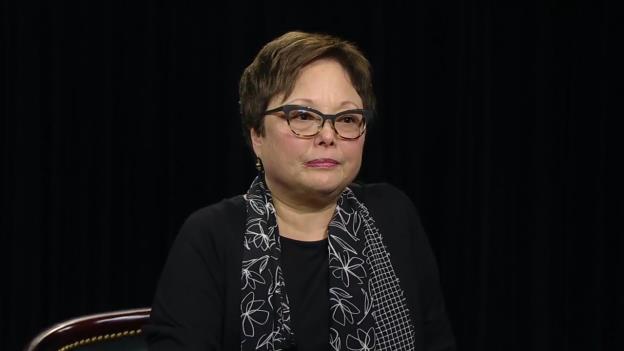 /tiles/non-collection/5/5-27-MinkKellySullivan-PA2021_11_0002.xml Collection of the U.S. House of Representatives Shortly after taking her seat in 1965, Mink posed for this picture during a meeting with Representative Edna Flannery Kelly, actress Maura Wedge, and Representative Leonor Kretzer Sullivan.

Members Only
On the afternoon of February 6, 1967, Representatives Mink, Catherine May, and Charlotte Reid derailed Herb Botts’ day. Botts managed the men’s gym in the basement of the Rayburn House Office Building, but he never expected the three Congresswomen to show up for his 4:45 p.m. calisthenics class. After all, women Members of Congress had their own gym just steps away.

Integrating Dick and Jane
In 1966, a subcommittee of the House Education and Labor Committee held a series of hearings on the portrayal of minorities in schoolbooks. New York Representative Adam Clayton Powell Jr. chaired the full committee, as well as its ad hoc Subcommittee on De Facto School Segregation. Powell was joined by other Members, including Mink and California Representatives Phillip Burton and Augustus Hawkins. The subcommittee investigated the depiction of minorities in schoolbooks, why school districts selected certain books, and how publishers distributed texts.

“It Isn’t a School, and I’m Not a Schoolmaster”