/tiles/non-collection/2/2-8-CBCFounders2-LOC.xml Image courtesy of the Library of Congress Founding members of the Congressional Black Caucus gathered in 1971.
During the 1950s and 1960s, civil rights activists waged a series of economic boycotts in cities throughout the South to protest segregation and overturn discriminatory policies. But even following the passage of the Civil Rights Act of 1964, boycotts remained a potent form of protest. In January 1971, when President Richard M. Nixon repeatedly refused to meet with Black Members of the U.S. House of Representatives to discuss policy, the lawmakers—many of whom had participated in the civil rights movement—decided to boycott Nixon’s second annual State of the Union Address.

The bold decision to boycott the President’s nationally televised speech generated widespread media coverage and led Nixon to finally meet with the lawmakers at the White House where they discussed expanding the rights of Black Americans and building on the achievements of the 1960s. The protest gained Black legislators a national platform and set the stage for a new era of Black leadership in Congress. Soon after, the group of Black Members announced it would create the Congressional Black Caucus (CBC) to continue to work on common issues and interests.

/tiles/non-collection/2/2-8-CBC-1975-Rockefeller-LOC.xml Image courtesy of the Library of Congress Vice President Nelson Rockefeller joined the CBC at an employment forum in 1975.
Since its founding, the CBC has advocated for protecting and expanding the rights of Black Americans and other underrepresented groups; and supported the fight for human rights abroad. The CBC has led a number of major legislative efforts, including the passage of the Comprehensive Anti-Apartheid Act of 1986, important amendments to the Voting Rights Act, and criminal sentencing reform. In the 117th Congress (2021–2023), the CBC has a record 59 members from districts across the country. CBC Members also hold positions in the Democratic leadership, including Majority Whip James E. Clyburn of South Carolina, and chair seven committees and 25 subcommittees.

Shortly after the State of the Union boycott in 1971, Missouri Representative Bill Clay succinctly described the political goals of the CBC that soon became a motto for the caucus: “We have no permanent friends, no permanent enemies, just permanent interests.” This Edition for Educators highlights material on the Congressional Black Caucus.

/tiles/non-collection/2/2-8-Diggs-2007_183_040-000.xml Collection of the U.S. House of Representatives
About this object Early in his House career, Charles Diggs sat for a photograph in the House Photographer’s office set. Color photography made a lively postcard image to send to constituents in his Michigan district, despite the black-and-white view of the Capitol from the “window.”

Charles Cole Diggs Jr.
Elected to the House of Representatives in 1954 at age 31, Charles C. Diggs Jr. was the first African-American lawmaker to represent Michigan in Congress. Diggs served as an ardent supporter of civil rights and an impassioned advocate of increased American aid to Africa. As a principal architect of home rule for the District of Columbia and the driving force behind the formation of the Congressional Black Caucus, Diggs crafted a national legacy during his 25 years in the House. John Conyers Jr. of Detroit, Diggs’s House colleague of many years said, “Congressman Diggs paved the way for an entire generation of Black political leaders, not just in his home state, but through the nation.”

Yvonne Brathwaite Burke
In 1972, Yvonne Burke became the first Black woman elected to Congress from California. Burke quickly won a prime appointment to the Appropriations Committee and, in 1976, became the first woman chair of the Congressional Black Caucus. In 1973, Burke also became the first Congresswoman to give birth and be granted maternity leave while serving in Congress. Burke’s prominent committee assignments and leadership roles positioned her well to serve what she called her “three constituencies. I had a constituency of African Americans, a constituency of women, and a constituency that elected me.”

/tiles/non-collection/2/2-8-Mandela-CBC-1994-LOC.xml Image courtesy of the Library of Congress In October 1994, recently elected South African President Nelson Mandela joined Congressional Black Caucus members (including, left to right, Donald Milford Payne, Kweisi Mfume, and Charles B. Rangel) for an event at the Library of Congress.

The Comprehensive Anti-Apartheid Act
On September 29, 1986, a strong bipartisan coalition in the House overrode President Ronald Reagan’s veto of the Comprehensive Anti-Apartheid Act by a vote of 313 to 83. The bill—a compromise between two versions sponsored by William Gray of Pennsylvania and Ronald Dellums of California—contained the first substantive economic sanctions to be levied against South Africa for its system of racial apartheid. Mickey Leland of Texas, a member of the Congressional Black Caucus which led the anti-apartheid cause, observed, “This is probably the greatest victory we’ve ever experienced. The American people have spoken and will be heard around the world.”

John Lewis Testifies on the Need to Extend the Voting Rights Act
On March 3, 1975, future Representative John Lewis of Georgia testified before the House Judiciary Committee’s Subcommittee on Civil and Constitutional Rights on the need to renew the Voting Rights Act of 1965. Lewis’s testimony came just days before the tenth anniversary of “Bloody Sunday” when he was severely beaten by state troopers during a peaceful march to protest voter discrimination in Selma, Alabama. Signed into law by President Lyndon B. Johnson a decade earlier, the Voting Rights Act banned discrimination at the polls and empowered the federal government to oversee the nation’s elections; the law required reauthorization in 1975. The subcommittee heard testimony from state legislators, Department of Justice officials, voting rights activists, state attorneys general, and Members of Congress, including Barbara Jordan of Texas and Charles B. Rangel of New York. 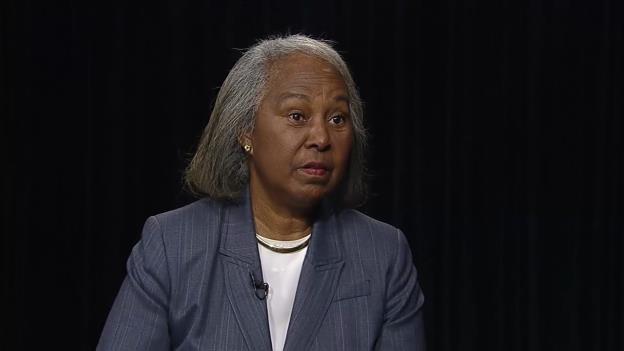 Shirley Chisholm Oath of Office
Representative Shirley Chisholm of New York signed this oath of office card on January 21, 1969. Representatives take the verbal oath of office en masse on the first day of each new Congress. Beginning in the 80th Congress (1947–1949), Members have also reaffirmed their commitment by signing oath of office cards. The cards are filed with the Clerk of the House and become House records that are open to the public after 30 years. Chisholm was the first Black woman elected to Congress and a founding member of both the Congressional Black Caucus and the Congressional Women’s Caucus. In 1972, she became the first Black woman to campaign for the Democratic Party’s presidential nomination.

/tiles/non-collection/2/2-8-Wynn-Button-2008_047_011-1.xml
The First Annual Benefit Concert for the Congressional Black Caucus Record
This vinyl album captures performances from rhythm and blues, soul, and funk artists at the Congressional Black Caucus’ (CBC) first benefit concert in 1974.
Black Lawmakers in Congress Fan
Fans depicting African-American Members of Congress were popular from the 1950s into the 1970s. This 1971 fan was produced the same year the Congressional Black Caucus was founded.
Shirley Chisholm of New York
Shirley Chisholm of New York attracted significant attention during her storied career in Congress. In this picture, she addresses a group of excited interns during the 96th Congress (1979–1981).
Albert Russell Wynn Lapel Pin
Albert Wynn of Maryland won election to the U.S. House of Representatives in 1992, and used this button during his first re-election campaign. He later chaired the CBC’s Political Action Committee and Minority Business Task Force.

/tiles/non-collection/2/2-8-Dellums-PA2014_08_0026a.xml Collection of the U.S. House of Representatives Ronald Dellums embraced the activist spirit of his northern California district, taking his seat in Congress in 1971 as an outspoken critic of the Vietnam War. Throughout his nearly three–decade career in the House, Dellums remained true to his antiwar principles, consistently working to reduce the military budget.

“Who Do You Represent?”
In 1971, the 13 African-American Members of the U.S. House of Representatives founded the Congressional Black Caucus, declaring their intention to reshape policy, legislation, and the nature of representation on Capitol Hill. For the first time, Black Members worked together to draft an agenda for African-American communities across the nation. Alongside the group’s collective strength, new Members—including California Representatives Ronald V. Dellums and Yvonne Brathwaite Burke—found allies and opportunities in the organization.

War and Peace: Representative Ron Dellums and the House Armed Services Committee
For many first term Representatives, finding a way to stand out in the large and crowded House of Representatives poses a major challenge. Ron Dellums of California had no such problem. Elected to the House in 1970, at the age of 34, Dellums drew upon his national reputation as a prominent anti-war and anti-establishment activist to challenge the institution and to secure a spot on the unlikeliest of panels: the House Armed Services Committee.

“Somebody Was Going to Be the First”

“The Bulwark of Freedom”: African-American Members of Congress and the Constitution During Reconstruction